Chimpanzees and bonobos: the differences

Chimpanzees and bonobos are very similar to each other. They are about the same size, both have black fur, arms that are longer than their legs, and neither of them has a tail. How can you tell the difference? Here are some tips:

Chimpanzees and humans have very similar DNA. DNA is the code of inheritance that defines the characteristics of all species. Our own DNA matches that of chimpanzees for 95-99%! Exactly how much it is, is still a matter of scientific debate, but it does explain why we resemble chimpanzees, both in appearance and behavior. The chimpanzee is even more closely related to humans than to gorillas! Every night chimpanzees make a nest using branches and leaves. At the end of the day, they climb a tree and find 1 or 2 robust branches and braid other branches and leaves into them to make a sturdy bed. A mother and her child share the nest to sleep, and in it they are protected from predators and rain. But the nests are also used to recover when they are sick, or even to die. They will never use a nest more than once. To make a nice pillow, they look for soft leaves and bundle them together into a pile. When it’s bedtime, they signal with a special call that the day is over and it’s time to sleep in the nest! 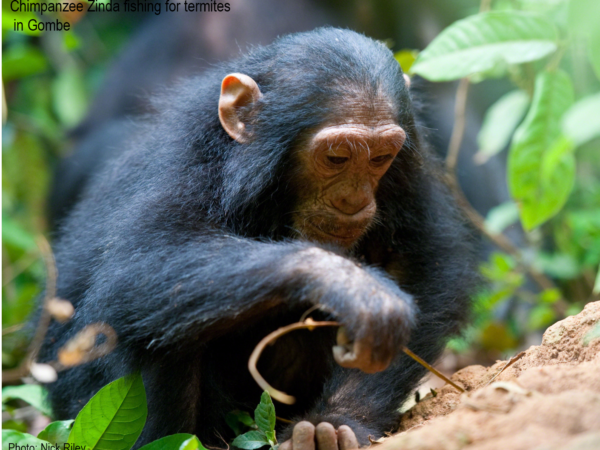 Chimpanzees are often on the move. In doing so, they don’t swing from branch to branch, but walk on feet and knuckles. They get quite hungry from all the walking. Chimpanzees climb trees looking for tasty treats. They won’t find dishes of spaghetti up there, so what do they eat? Chimpanzees love nuts and fruit, and are also fond of leaves. Occasionally they will hunt for insects and small mammals. Chimpanzees share food with whoever has been kind to them.
Young chimpanzees keep a close eye on their older group mates. In this way they learn useful tricks to get all kinds of goodies. For example, with a stick you can “fish” for tasty termites or ants. With a hard stone you can crack a nut. Some chimps even fetch honey from a beehive. Young chimpanzees learn what tastes good or what is better left untouched, by watching others carefully.

Who doesn’t like to play? Even the youngest chimpanzees can’t resist a game! But how could Jane distinguish between playing and fighting? Chimpanzees kick and hit each other, head-butt and throw things, both during play and fight. Of course, playing is less violent. To clearly see the difference between fighting and playing, Jane observed their faces. They let their mouths hang wide open, without showing the teeth. This is their play face which means they are having fun.
They also make specific sounds. They produce soft, short panting sounds (hee-hee-hee). This sound is almost exclusively made when they are playing. It sounds like laughter! By putting on their play face, chimpanzees shows that they want to play or that they certainly don’t feel like stopping playing yet. If two friends keep smiling and showing a play face, the party can go on for a very long time.

Did you know that this play face and laughter often first appears when a chimpanzee is only 2 to 3 months old, when they get tickled as a baby by the mother? They are especially sensitive under the arms, on the belly and in their sides. When a young chimpanzee is over a year old, it may even ask to be tickled! To do this, it stretches his arms backwards, over the shoulders, and sticks its tummy forward.

Why do we get goosebumps? This does not only happen when you are cold, but also when you get scared. People used to have long hairs. When danger arose, such as an approaching predator, people got scared and would get goosebumps. This made those long hairs stand on end, so that you seemed bigger: an effect that could chase off dangerous animals. For chimpanzees, this is still the case. We humans took up the habit of putting on warm clothing, which caused our hairs to become much shorter. When we get goosebumps, there’s not much to see anymore, but on chimpanzees, the effect is much more impressive. 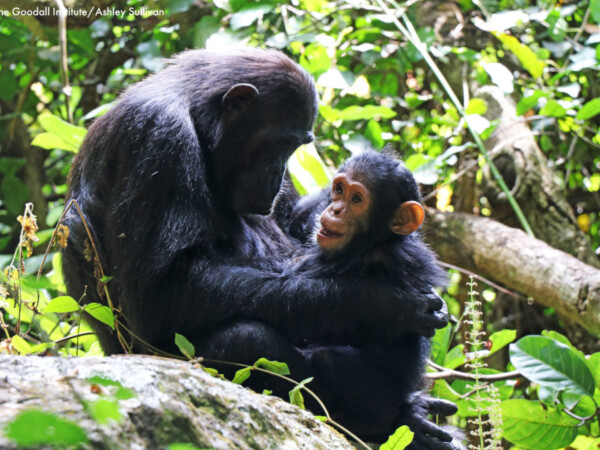 A newborn chimpanzee (younger than 3 months) is carried by its mother all the time. She supports and rocks her baby. This rocking is very relaxing and makes the baby fall asleep. When the little one gets a bit older, its mother will not support it so much anymore and it has to find a comfy spot on its mother on its own. Later on, the baby clings itself to its mother’s belly, but that is not so easy. Fortunately, mummy lends a helping hand until the baby knows how to do this. When the young chimpanzee (from 6 months onwards) has grown a bit more, the time has come to travel on its mother’s back. At first, it will lie down with its head close to mummy’s neck or shoulders, firmly holding on with its hands and feet wherever possible. Later on, it will become a bit more daring and sit up straight.

Mummy chimpanzee also makes sure that her baby stays clean. The older the young chimpanzee gets, the more often and the more thoroughly she grooms it. For chimpanzees, grooming is an important activity for making friends. At first, mummy keeps her young away from the other chimpanzees to protect it. Later on, she allows more and more chimpanzees near her baby, although she will remain vigilant. A mother who grooms her baby and plays with it, develops a strong bond with it. When Jane used to observe chimpanzees, she has seen how a mother would stroke her sleeping baby while looking at it and kissing it.

An eye for treats

Did you know that chimpanzees, compared to other mammals, are very good at distinguishing colors? This helps them to recognize colourful, ripe fruit on the ground. It’s also why they can see very well if leaves are still young and fresh. Because of this well-developed colour vision, a chimpanzee can easily spot the many treats that are to be found in the woods.

Fishing termites by using a stick is not so easy. Young chimpanzees will closely observe the adults to learn how this works. Girls watch their mother attentively and learn quickly how to set about it. As such, they master this skill pretty soon. Boys pay less attention to their mothers, and it takes them about two years longer before they can fish termites as well as the girls.

The boys are the most playful chimpanzees. Each group has its own set of games. Some games are so unique that they have only been observed in a single group. One of those special games is the leaves game. It goes like this: a young chimpanzee makes a pile of dead leaves by brushing the leaves together using its hands and arms. Then, it pulls this pile while running backwards, making a lot of noise with the rustling leaves. Sounds crazy, doesn’t it? Maybe you can give this a try in the fall?

Did you know that chimpanzees have been observed looking for a flat stone, taking it with them, and using it as a chair? This way, they didn’t have to sit on the thorns of certain plants while they were eating. They sometimes also used this stone to protect their feet so that they did not have to step on the thorns. In other places, chimpanzees were observed making a cushion of leaves so that they did not have to sit on the wet ground.

Grooming, but not because of fleas

Chimpanzees groom daily. Often two or more chimpanzees are involved in a so-called “grooming session”. One of the monkeys will be the “groomer” and goes with the lips or fingers through the fur of the other: the “receiver”. However, chimpanzees are not looking for fleas …

Chimpanzees groom each other for different reasons. Behavioral biologists agree that the monkeys aren’t looking for fleas because chimpanzees don’t have them! Yet they are looking for something: certain irregularities and dirt. So grooming does have a cleaning function. Perhaps more importantly, grooming behavior is one of the most important social behaviors. Within this social context, grooming has different functions. 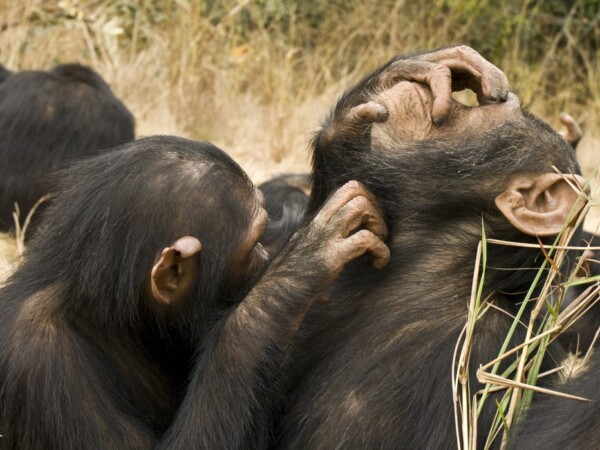 The groomer (left) runs his fingers through the fur of the recipient (right). Sometimes one grooms the other, but it also regularly happens that chimpanzees are simultaneously grooming each other.

Being a little social
Grooming helps to build, maintain and strengthen social bonds. Whole “friendships” can arise as a result. Chimpanzees are, just like humans, social creatures that like to get attention from each other. Cuddling and cozying up together, is soon followed by grooming behavior. All chimpanzees do it. It’s in their nature.

A bit of kissing up and negotiating
A chimpanzee that is lower in rank tends to groom the more dominant chimpanzees more often than the other way around. This difference is less evident in chimpanzees than in other monkey species, but it is there. One of the explanations is that grooming can be used as a means of kissing up and negotiating. Think of it like this: by grooming a more dominant monkey often, you may eventually be able to climb higher up the hierarchical ladder yourself.

It also seems that grooming can be used as a means of negotiating food, or mating and choosing partners. For example, you can imagine that there is a lot of competition between male chimpanzees. By grooming, they take away part of this competition, because they create a kind of “division” among each other. Also, fertile females are sometimes groomed by males for a long time to satisfy them.

Relax a little
In addition to this “business” side, grooming can also be a way to relax. The grooming behavior ensures a significant decrease in stress. This is not difficult to imagine: many people also like it when their hair is brushed by someone else or when their back is stroked. This is very similar to grooming behavior. The social behavior of humans is much more complex than that of chimpanzees. Still, many ways in which people are slightly nicer to each other can be considered a form of human “grooming”.

We know that the grooming behavior reduces stress because it occurs more frequently in situations of social tension. When there is a lot of aggression within a group of chimpanzees, they groom each other more often, after which the aggression decreases. Also in other stressful times, for example during times of bad weather, chimpanzees groom each other more intensively in order to relax. But they also take care of each other when they are relaxed, so they have plenty of time to be friendly with each other. A grooming session can last seconds, minutes, and sometimes hours. 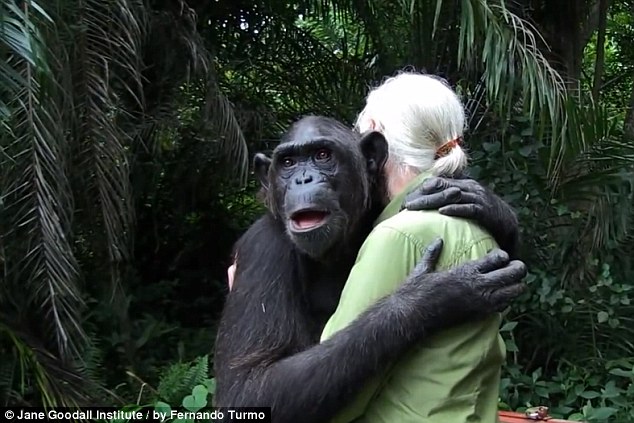 As you can see the chimpanzee is a complex, sensitive, and social being with the same range of emotions as humans. By researching their behavior, we not only learn a lot about the great apes but also about ourselves. Moreover, protecting them serves a higher purpose: to contribute to a better world in which all beings can have a place and live together in harmony.