Wounda – Love from the Jungle

Name a famous television hero who is king of the jungle and protector of the apes. Tarzan? No, not in the Republic of Congo. Congo has its own hero. Congo has Super Kodo! 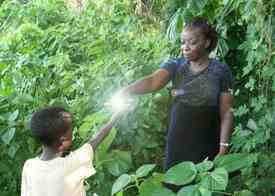 Some years ago, Super Kodo was just an ordinary boy from a tiny village in the south of Congo. Until the day when, while wandering through his beloved forests, he suddenly found himself face to face with a mysterious mermaid. The nymph praised him for his love of nature, looked deeply into his eyes and gave him magic powers. Ever since, Kodo has been able to fly and make himself disappear and a magic flash of light he can turn the most dyed-in-the-wool poacher into an animal lovers and nature conservationist. Superhero status also requires a superhero outfit, so Super Kodo was given a golden suit, complete with cape and emblem. 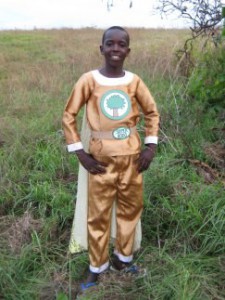 Super Kodo is the creation of Fernando Turmo, communications and media coordinator of the Tchimpounga Chimpanzee Rehabilitation center, the biggest chimpanzee sanctuary in Africa. In 2009 he decided to film an episode with children from the neigbouring village. The idea was to use this episode for educational projects in schools. Fernando aims to reach children through children. In this way, they learn through play and from their peers about problems in their environment and the importance of the forests. In this work, Fernando uses aspects of Congolese culture, such as the belief in nymphs and magic. Fernando held a casting session in the near-by village of Boueti and young Carel Mousseisi immediately impressed him. “He was Super Kodo, no doubt about it”.

It didn’t remain at one episode. Super Kodo was an enormous hit and to date 10 episodes have been shown on Congolese television. This is the only children’s programme in the local language of Monokutuba and repeats are shown over and over. Just about everyone in the local area, young or old, knows Super Kodo and is thus made aware of the disastrous impact of the bush meat trade and of the rules and legislation on hunting. This, together with advertising hoardings about illegal hunting and the illegal bush meat trade that have been put up in the area, has led to a situation where not one single chimpanzee has been confiscated in this region since 2009. 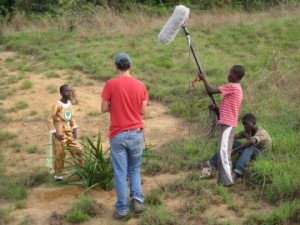 Carel is now fifteen and has become something of a celebrity in Congo, the hero of many schoolchildren. Because of his magic powers, people tend to be careful how they treat him. When I visited Tchimpounga, I had the opportunity to meet the charismatic super hero during the filming of a new episode. In this episode, Super Kodo and his friends help to plant tree corridors to link different wild chimpanzee habitats. Carel and the seven other actors work on the series on a volunteer basis and obviously enjoy filming the episodes. Carel is happy to be able to play such an important role and to teach children about nature. In return for their participation, Tchimpounga pays for school supplies for the actors every year. 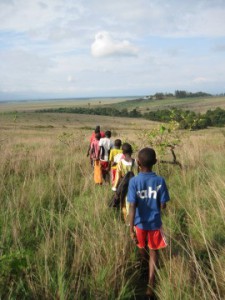 Fernando would love to develop the series further, but unfortunately doesn’t have a budget to do this. He doesn’t need a lot, everyone works for nothing and with very little means an impressive result is achieved. However, a small amount is necessary for the production itself. For example for costumes, snacks for the children and transport to various locations. If he had more money, Fernando would love to produce a French language version of the series. In order to do this, he needs to bring in children from the city who are French-speaking and can dub past and future episodes. At the moment, the series can be watched in the region of Pointe Noire and thus reaches about half the population of Congo. If it were in French, not only would it reach the whole of the country, it could also be broadcast to other French-speaking countries in Africa. But the main reason Fernando would like a more structured budget is to help the stars with their education. The children need to move to the city to continue their studies, and their families can’t afford it. “For over four years these children have been working for nothing to promote nature conservation in Congo. It is high time to do something for them in return, over and above paying for their books and school-supplies. I would love to pay these young people by giving them an education and thus a brighter future”. 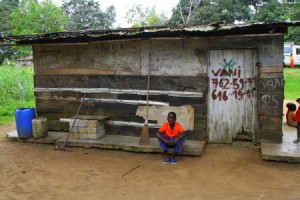 When we arrive in the village to pick up the children for filming, I understand Fernando’s wish. We see the house where Carel lives with five family members. Not exactly the luxury villa, complete with swimming-pool, which you’d expect for a film-star of his stature. It is a small wooden hut. Carel sleeps on the ground. And during the rainy season, the ground turns into mud.

Meantime, episode eleven is ready to be broadcast and there are two more episodes in the pipeline. So for the moment, the forest-dwellers can count on Kodo’s protection. And they certainly need it. 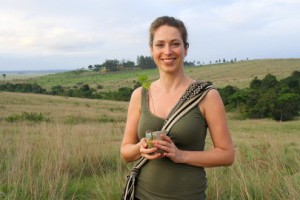 Written by Susan Peeters, volunteer at JGI Nederland she worked at Tchimpounga in 2012. She shared her experience with our JGI Belgium team in May 2013 during one of our volunteer meetings.

Categories:People
As most websites our website uses cookies for various features. We hope you agree with it - if not, please feel free to disable the cookies in your browser.OkCookies