Hiila is an adult chimpanzee living in the forests of the Dindefelo Community Nature Reserve in southern Senegal, where the Jane Goodall Institute Spain (IJGE) team has been carrying out a research and conservation programme for the endangered subspecies Pan troglodytes verus since 2009. Hiila has always been among the favourite chimpanzees of the IJGE research team at this site, composed of Senegalese field assistants Wandou and Djiby, and Spanish biologists Amanda and Paula, living with local families. 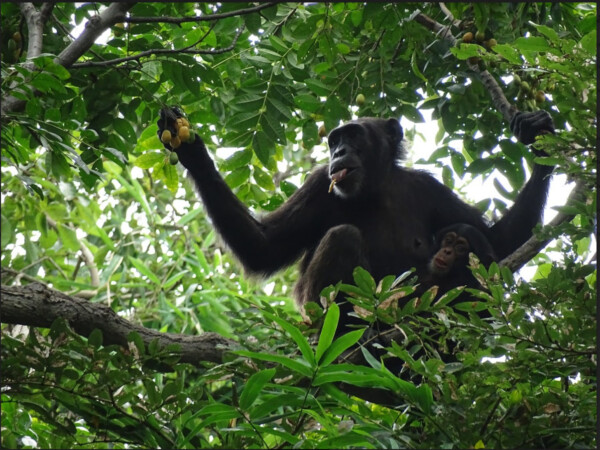 Hiila was the first chimpanzee in this area of Senegal to allow Paula and Wandou to gradually get to know her life. One morning, the research team saw a group of chimpanzees eating, but when they detected the team’s presence, they slowly retreated. One male stopped when he reached the ground and looked intently at a tree for a few seconds, then moved on and left. This last gesture of the male gave away Hiila’s position, lying in a nest in the same tree. Hiila turned her head slightly to look sidelong at the team and then settled back into the nest, lying on her side, her back to them. After waiting a few minutes, and as Hiila was calm, the team moved a few metres further up the slope in search of a better viewing angle. Hiila glanced sideways at them again and again rearranged herself so that her back was completely to the team’s new position. Amanda and Wandou thought something was wrong with Hiila, as she had never had such a dodgy reaction before, so they both grabbed the binoculars to try and see what was wrong. It took them about 45 minutes to figure it out: when Hiila had rearranged herself, Wandou and Amanda saw a small hand, very pink and tiny, clutching tightly to Hiila’s belly hair. Wandou and Amanda saw it at the same time, and after looking at each other, whispered at the same time: “Did you see that? The team decided to back off a little and give Hiila some leeway. After a good while, Hiila sat up and turned directly towards the team, with the little one clutched to her belly, as if showing it off, looking intermittently at her newborn and the team. The baby appeared to be tremendously fragile, very small, with pink skin, very wrinkled, and still a little purple in places. His hair, still a little damp, very black and shiny, contrasted sharply with the pink of his skin. The little boy had his eyes closed and yawned, making the team even more aware of how small he was. Wandou, an older man of few words, looked at Hiila excitedly, with that tender gaze with which he looks at his young children. Then, somewhat embarrassed by the moment, he smiled shyly and said in French: “Amanda, write in the notebook! Hiila has had a baby! You have to write a lot! It’s a very important day!” Cheempo was born.

Hiila is a devoted mother and very affectionate with her little one. He likes to lie on his back on his mother’s legs, while she inspects his face with her long fingers, wiping and touching him very gently.