Jane Goodall Institute Belgium > About us > Our people > Our team

Anouska Plasmeijer
Executive Director – anouska@janegoodall.be
Anouska Plasmeijer is a Dutch national and has been living in Belgium for the past 15 years. She is the new Executive Director for JGI Belgium as from 01 January 2020. She holds a degree in tropical forestry and worked for a big nature conservation corporation. She lives in Brussels, is married and the proud mother of three beautiful children and has an adorable rescue dog.
A long-time admirer of founder Jane Goodall she was pleased to learn about the many activities we do in Belgium, specifically on reforestation. Anouska is keen to get more involved in local activities and joining forces with other likeminded people to improve the environment and the lives of people and animals.
Her favourite quote: “Life is what happens to you when you are busy making other plans” from the song Beautiful Boy by John Lennon.

Nektaria has Greek roots and works as a legal advisor specialising in environmental and animal welfare law. She is a passionate runner and reads books by the dozen. From when she was a little girl she had a passion for helping the environment and animals. She believes that animals are not objects for us to use and that there is no excuse for animal abuse. She wants to be a spokesperson for the environment and animals who don’t have a voice of their own. She believes that our prime purpose in life is to help others and to make a contribution in this world, or to put it in the words of Ghandi: be the change you want to see in the world.

Kathleen Leemans
Memberships coordinator – membership.nl@janegoodall.be
Kathleen joined JGI Belgium being inspired by the stories of dr. Jane Goodall, yet she stayed for finding a heap of similar motivation and ideas in the other members of the team. She practices her feel for nature by identifying and being aware of all kinds of creatures that pass her by. She is intrigued by moths’ beauty and diversity, while big apes teach her on our own place in nature. Currently, she is finishing her biology degree. She likes sustainability and being creative. 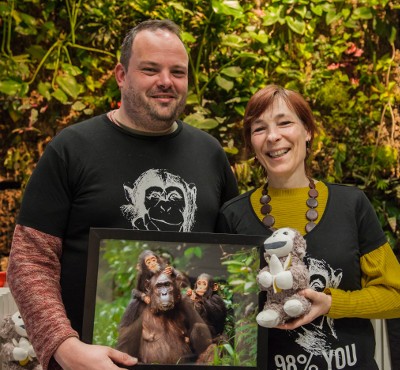 Tania Parys
Roots & Shoots coordinator – rootsandshoots@janegoodall.be
Tania is a passionate and freedom loving person. Her daughters, Emma and Margot, have absolute priority. She loves travelling and loves going to less popular places where other people wouldn’t go. She has a constant hunger to learn and likes to challenge her creativity. She doesn’t like mainstream and is always considering other options. She likes to teach and to connect. She teaches biology at school and also teaches kids how to swim, gives aqua-gym lessons for pregnant women and woman who have had heart problems. These are her two big passions. If she disagrees, she will tell you and she still has to learn to be more of a diplomat. She loves people who inspire her…as Jane does. 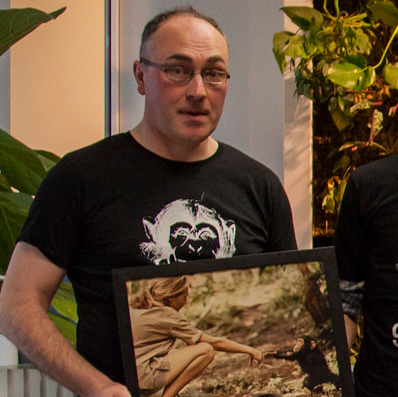 Ronald Eelbode
Webmaster – ict@janegoodall.be
Ronald is a Flemish chemist and webmaster/webdeveloper. Since 2015 he has been maintaining and developing websites and occasionally translating for JGI Belgium. He likes the combination of science and spirituality in Jane’s book Reason for Hope.

Sophie De Spiegeleir – newsletter@janegoodall.be
Sophie is a born and bred Belgian. After completing two Masters in Social & Cultural Anthropology and in Victimology & Criminal Justice, she is now working on a PhD project on cybervictimisation. Although her passion lies in human beings and the understanding of their social interactions, animals and particularly Big Apes have fascinated Sophie since childhood (you should see her collection of cuddly animals!). Travelling the world, meeting new people, tasting different food is also her favourite pastime.  More importantly, Sophie’s biggest dream is to make this world a better place, which is one of the reasons she joined the Jane Goodall Institute Belgium in December 2017.  She is now responsible for the JGI Belgium Newsletters.

Ivan Dunsmore
Ivan’s interest for photography started when he was travelling in India many years ago and broke his mother’s camera by accidentally dropping it on a stone floor. Instead of buying her a new camera he bought a new one for himself and did not stop taking pictures for the rest of the trip. After finishing his studies in Social Sciences in 2017 he discovered JGI where he is happily giving his contribution to spreading respect for all living creatures.

Alfred Eliba
Alfred is an ecologist and biologist in wildlife conservation. He worked for six years community conservation on grauer’s gorilla protection in the East of the DRC. From 2007 to 2012 he was Coordinator of the Usala Gorillas Reserve around the Maïko national park supported by the Dian Fossey Gorilla Fund international, he also volunteered for the Kumu Foundation supported by the Conservation International/CARPE-USAID program in central Africa on preserving forest against climate change. He joined JGI-Belgium as volunteer in 2015 in order to share his field work experience, to improve his knowledge and to contribute to the JGI. He wishes to make a difference to save our earth. He obtained a master degree in tropical wildlife management at the Liège University.

Katleen De Buyser
Katleen saw her first daylight in Bruges. And as a great ape and animal lover herself she loves to spend hours in nature as a passionate photographer. The Jane Goodall Institute Belgium is like a natural extension to this innate nature-love.
It’s so nice to fire up awareness and to help address lots of possibilities of what we can do to conserve and contribute to our wildlife and our-all habitat: Earth.
Let’s keep this flame of care and support towards other human and non-human beings, inextinguishable!

Sandy Paquay
Sandy is a passionate morality teacher. There’s nothing she loves more then to empower young individuals to stand up against injustice and inequality. She got involved in JGI in 2014 being inspired by all the Roots and Shoots projects of her school. She became a JGI volunteer after a wonderful Music for Chimps experience in 2017. Good to know: Sandy doesn’t eat meat feeling too connected to animals who can’t speak up for themselves; she likes being around inspiring people and that’s also why she loves to travel. She believes, just like Jane, that we can all make a difference and have an impact. “ Be the change you want to see in the world” is her motto.

Margaux De Pauw
Margaux is an archaeologist, but without Louis Leakey around to sent her to a rainforest, she got sidetracked and ended up in the art world. She got her love for nature from her parents, who made sure to put Jane Goodall’s “In the Shadow of Man” on her bedside table. A chance encounter with Jane in a gallery rekindled the flame, and she joined the Jane Goodall Institute Belgium as soon as possible. Hobbies include drawing extinct animals, eating broccoli soup, and playing the harmonica really badly (or so say her dogs).

Christos Maniatis
Christos was born in Athens but grew up in in the heart of Africa, in Burundi.
Robotics engineer by training, his passion for animals and nature is immeasurable.
As he grew up hearing stories from Jane, she became a real inspiration to him.
Beside his love for nature, he loves sport, wildlife photography and hate injustice.
He joined the Jane Goodall Institute in 2017 as a volunteer. If one sentence should describe him it would be: ‘I am not African because I was born in Africa but because Africa was born in me.’ by Kwame Nkrumah.

Louise Delhaye
Louise was born in Saudi Arabia where she spent her first years of life before moving to Vienna and, a few years later, to Congo. She then arrived in Belgium, her mind full of memories and pictures of other cultures and countries. But amongst them, there were also images of plastic bags spread all over astonishing landscape, of people living in misery and of animals being mistreated. More than ever determined to make a difference, she is now doing a master in marine and lacustrine science and management. That’s when she fell on a title of the National Geographic “Be like Jane” that she decided to join the JGI.

Laureline Maurer
Laureline is studying editing in a cinema school in Brussel. Fascinated by animals behaviour, especially monkeys behaviour, and determined to take action in the protection of the environment, she decides to help the Jane Goodall Institute by making pictures and short films about some actions of the JGI volunteers.

Jens Warrie
Jens got to know Jane during high school when he wrote a project about chimpanzee behaviour and became a fan ever since. He is currently employed as “MOS-begeleider”, a sustainability coach for all the schools in Brussels. He loves to combine aiding the cause of his idol and his personal expertise in environmental education in the Roots & Shoots-project and JGI Belgium in general.

Lysiane Pons
Lysiane comes from a small town in southern France, close to the Spanish border. She quickly moved to Paris to get her master degree in Cultural Mediation to then go live in Greece where she worked for several associations and to Belgium to work for a science and policy think-tank/media agency. She loves animals, to help people, art, design and all geeky things. Since January 2018 she helps the Jane Goodall Institute with funky new designs and looks forward to do more.

Fabiana Pica
Fabiana joined the JGIB in 2010; both italian and belgian she strongly believes in the concept of interdependence and solidarity between life forms. Everything is connected. Her deep passion for nature and animals has always inspired her life. « We need to cultivate respect and compassion for all living things to make the world a better place » The Roots & shoots program is a must !
Fabiana is an active member of the Jane Goodall Institute Belgium doing translation from EN into FR and viceversa. She has recently moved to Rwanda, Kigali, with her family, this year where she will follow her passion for wildlife conservation.

Vasiliki Boukouvala
Vasiliki is a marketer and she worked in universities and educational institutions, both in Greece and in Belgium. She wanted to participate more actively in any kind of effort to protect our natural environment and this is how she joined the Jane Goodall Institute. In her free time she is dancing, biking or reading literature. She loves traveling, inspirational quotes, happy faces and popcorn. She dreams of a world without war, injustice and laziness.

In order to register visits to ou website cookies are stored on your device. These cookies do not register any personal data. If you continue to use this site we will assume that you are happy with it.Ok